Let’s get some more work done on our hex maps, before I return to work.

Last time, we created the broad outline of the game world. Now, I want to skip down to the fine details of the starting area for our eventual game.

So… let’s work on this hex there:

ENHANCE! (and do some landscaping work, I guess)

ENHANCE! (with extra work just to make a nice coastline) 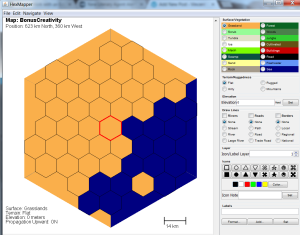 There we go. 14km hexes are small enough to allow for some worldmap-level detail (in general, I’ll only go smaller for hexes of interest.) As a rule of thumb, I figure players will cross one hex of practicable terrain in a half-day, or of rough terrain in a day.

So what do we want in our starting area?

First, some basic amount of civilization. I figure I want a small city on the coast, perhaps a pair of additionnal settlement inlands. And why not a fortress on that island?

Beyond that, I add some basic geography. Some hills, some mountains, some waterways, and the beginning of a road. We end up with this beautiful landscape:

A fine start for a campaign. The players will start in Port Roven, with a few quest hooks available in town. I imagine I’ll go with some classics (like “goblins in the mines” or “protect the caravan” but I’ll also offer exploration opportunities (maybe go map the Roven River tributaries?) and perhaps some political chicanery (like dealing with a rival nation down in the southeast hex?)

Either way, it’s a start on the mapping front. I think I’ll work on detailing Port Roven next.